@lgNanessa @SparklyUnicorn I updated this based on recent feedback. Saved the previous version as well. 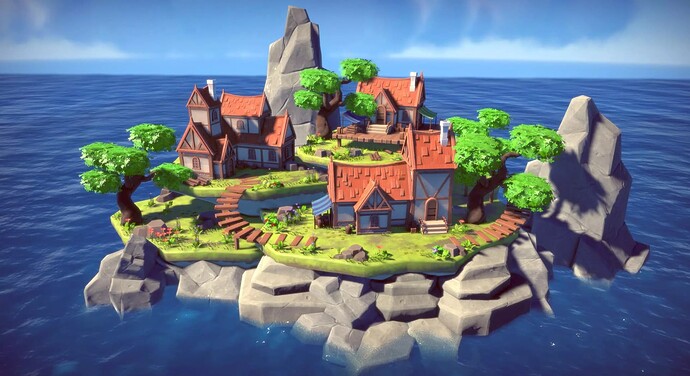 CU towns can become an immersive in-game place for players to enter the CU Universe. Based on excellent community feedback I offer version 2 and hope to get additional feedback before working with LG to create an official proposal that can be voted on.

Talking about this concept with phases and options in mind basically offers a potential road map as the potential evolution of this idea is very relevant.

Special thanks to @Rubick, I encourage them and others to put such ideas here on the Forum as well as Discord. A big motivation for this rewrite is Rubick’s response. I’m going to do my best to ‘tag’ people for idea contributions, Rubick got a shout-out because he would need so many if I did them all.

Teach players how to play

A single tile, or perhaps even a 2x2 tile. Could start as a 1x1 and grow over time / with upgrades.

To start, these buildings could basically be equivalent to the current game buttons and do not require development of new game mechanics while enhancing the overall immersive experience.

Much more is possible but I wanted to stick to bringing together the existing elements. As we await Shadow Corns my imagination has no problem envisioning a building to represent the Unicorn side of things, perhaps a ‘Watch Tower’.

Next level ideas for this Town Square concept, levels of course. A starting point of the conversation is that initial level upgrades could simply be cosmetic and that connected land titles increase the Town Square level. I don’t see much point in going down the bonus rabbit hole, let’s just say there is much potential and leave it at that.

The Inn / Tavern could be linked to Social Media, a Referral Program, and other various ways to engage with the community and promote CryptoUnicorns. Perhaps new players could do quests outside the game (post, like, retweet, etc.…) and start earning ‘starter items’.

Based on AMA / Town Hall, roadmap, and medium articles potential future buildings could include

With a free to play and tutorial / guide / showcase concepts in mind let’s consider these ideas:

Starter Farms Plots could be limited or equivalent to regular farms but would be present from the start on the town tile. Perhaps there is a farming section of town and we start with one or two plots and unlock more with upgrades / quest completion. The farming area of town could even include a cute seed / berry ‘farmers market’ stand. I’d love to see a Farming Corn NPC that offers free seeds each day and has some simple quests that require berries and other items to advance the farming area. Completing these quests could start to unlock adjacent land bonuses. Possible limitations could be lower yields, and fixed, lower upgrade bonuses, longer timers.

I feel like this is a great start to make things ‘sticky’ for new players without them thinking about spending / investing or expecting ROI.

Starter gathering system, maybe more of a NPC you give berries to in exchange for items they collect from around town. Ties back into the starter farm plots and could be a source for Crafting Academe quest recipe base items.

As Rubick mentioned, providing access to these for free could really start to drive Rainbow Marketplace activity and micro transactions from a huge player base. Being active in this starter level could also be a prerequisite for contests / raffles of in game items, potentially even eggs or lands.

Most Likely any starter building (plot, workshop) would be capped to low level compared to the buildings we are used to on our Land NFTs and due to restrictions any serious economy participants would not utilize them after getting their first land established.

We could have an entire discussion on the RMP, I think at least to start it is better if players still need a Unicorn to sell and stash out, perhaps even a land. This would keep things from being too easy to exit liquitly from the game without actually owning the traded assets, Also think it addresses my own concerts about Bot activity rather well. Players could still stash in RBW and buy RMP items.

I really like this idea! Almost like an in-game lobby like any other multiplayer game thats popular on console (COD, Fortnite, etc.). It would really add to the experience and could be expanded upon in the future.

If this doesn’t require a lot of development time, I am all for it.

When thinking about all the new players that come to CU for Jousting I think it would be really cool for the jousting corns to have a place to roam around, maybe even display badges, trophyes, etc…

Sorry for all the edits, refining the idea and swapping out the inspiration image as a find better options.

Don’t worry about the edits! This is the purpose of the Proposal Ideas category; through the community, we can refine and add more to your proposal until it is ready for the next steps.

Not gonna lie… First i was like “what an unncessary idea” but I honestly do love it.

Not only does it give a nice representation of all the things you mentioned, as well as a gamified possibility to announce maintenance etc. but it also gives new players something “to start with”.
Its not just empty but you can actually have something right away and build your lands around it.

I am not even sure though whether it should cost 5$?
Why not provide it from the get-go as you dont really have any advantage with the land, do you?

Its simply the base “platform” which you will build your CU empire on, just your foundation.
Therefore I would even make it free right away, every wallet will have this land sitting there as soon as you login the first time - imo it would make it even more complicated to give it a price tag.

Make it free, give new players something to start with (even if they cant farm etc. on it) and just give them a lobby which invites them to read news, click on the market, go to the busstop, discover CU and then build their own lands & corns.

PS: Considering Jousting etc. I even think that such a land is a MUST HAVE for these players. You cant just have nothing and go jousting, thats super lame imo. Such a land would be a 10/10 benefit for CU (but make it free please)

Yeah awesome idea my friend… you have my voting weight if you can get a formal prop put together.

Why not provide it from the get-go as you dont really have any advantage with the land, do you?

I don’t have any objections to this.

Considering costs of corns / lands I figgured $5 is a low entry barrier.

A possible advantage is if future rewards, air drops, special events are linked to wallets / this special land then the $5 fee helps reduse bot activity.

That $5 could also be given back to the player over time for being active in the game.

Maybe a hybrid option, there is a free / automatic version for any wallet address, but for a small fee you get a special status or unlock extra features, like naming your town. Just thinking things out as we go.

Great idea! I feel like this could be great for on-boarding new players too and letting them get a better feel for the game besides emptiness in a blue void aha.

If we get enough community interest and discussion here LG has a process to do an ‘impact report’. So please continue adding to the idea and bring others into the discussion.

Sparkly is right in that revisions are expected! This is the perfect opportunity for you (the author) and the community to work to polish the idea and align expectations!

You’re also free to write the actual proposal anytime (or once you’re ready). Reach out to me when you’re ready, and we’ll work on getting it in the right format!

I’ll try to get started on pinging the related teams for their input to ready the impact report, given that it’s received positively so far. I’m looking forward to see how this will pan out!

The idea is good for an animated gateway to CU universe. Function seems very much similar to the app website that the developer has built or is building. Would love to see that when I log in.

I think it should be free for all accounts. By asking new players to pay $5 doesn’t attract new players. As most of the time they would want a ROI on that items that they are paying.

If it is free for all and have no devaluation to existing land owners, I will vote for it.

I think it is a wonderful way to really build a game community! With a townhall venue I think it’s much more fun to stay in the game and interact with the community more often.

Good morning. Thank you for the great feedback. I’ve revised the idea and look forward to seeing what others are willing to contributive.

Next step for me is to start working this in to a formal proposal over the next few days.

Such a great idea! Imagine you get this airdropped as an invitation into the CU universe. With a link and instructions on what to do. You could walk through this town square and see everything they have to offer.

Imagine you get this airdropped as an invitation

My heart rate just quickened. The promotional aspects are intriguing.

great idea! straight up loving it.

Any thoughts on seeing these guys walking around town?

Nice idea! it will polish the in game buildings, integrate the functions into a specific building and make space for the future developments. I love seeing this in the future if it is not take a lot of time from the devs and doesn’t too much effect to targeted timeline of the roadmap.

Depending on the LG impact report maybe some aspects of this is a good fit for an outside developer. Perhaps LG can create a RFP based on this and puts it out for a bid.