Sounds pretty awesome to me. But for a center we need a 5x5 grid

I think it is awesome, BUT I wouldn’t prioritise it to other more urgent topics like jousting.

for a center we need a 5x5 grid

I kind of assumed it would not be used as a center tile as that would negatively affect the current land bonus mechanics. Initial version would likely be placed on an outside edge for players that care about the bonus.

I’ve had a few ideas regarding the bonus but feel like that is outside the scope of this discussion.

The other thing is even though we talk about grid sizes we really are talking about max tiles, 3x3 = 9, 4x4 = 16. You can arrange them however you want on the 7x7 game grid. 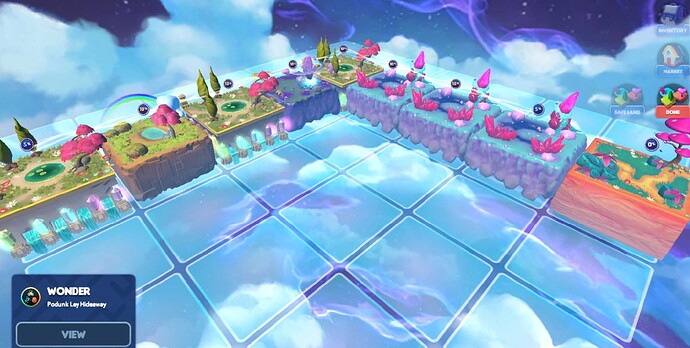 I feel like that land should be built like others with a keystone. It has benefits for adjected land like a mythic, so all get +5%. But on the other hand you are unable to build all other buildings and farms on it, making it the actual center. That was my thought just to explain a little further

Still like the idea no matter into what direction it would go!

It has benefits for adjected land like a mythic

This is the first mention of such a thing.

A big part of this idea is to have a starting point for new players that may not be interested in the general land game play.

I made an almost identical suggesting in a Town hall recently. I then wrote up a quick bullet point of those ideas in the founders channel to get a feel for what people thought.

Cant destroy the buildings and no nursery.

The marketplace selling limits of unicorn would be restricted to the no. of NFT lands you have attached to the centre piece. (1 unicorn per common, 2 per rare and 3 per mythic)
No NFT land only buy from marketplace.

.
.
The reasons for doing this centre piece would be numerous but the number one benefit that could be realised is player acquisition. You have mentioned making a cost due to bots when actually bots would have no impact on the economy based on your game idea so they wouldn’t happen anyway under your original proposal. Its a mute point. However to give people a taste of the game and get them hooked you have to give them ability to realise small rewards and experience the game in some similar form to the paid version.

If you make it free and slightly modify the rules of the game to nullify bots impact, we can onboard millions of players and get them hooked so that they do what all Free2Play games do. Sucker you in to making purchases.

Here are my ideas for you to take onboard.
This would come out as part of the Tribes update where the grid limitations are removed.

This then could act as a tutorial building. Showing the user what is possible in Crypto Unicorns. You could have the options to build a cart and workshop but they only lead to a tutorial and end with. :You need to buy lands and attach them to your centre home land to be able to utilise these buildings".

This land could be expanded on as new game loops and game updates come. Like University or Sacrificial Altar. At some point for unicorns to hold value there will need to be unicorn burn and/or horizontal levelling up. (Spend resources to upgrade your unicorn.) These buildings could be introduced onto this centre land.

I like your idea, (Maybe because it was almost identical to mine P) Good luck on getting the proposal through, I will support it. Feel free to take onboard any of these ideas into any of your revisions.

if people have to pay an entry fee and buy potions to enter a unicorn into a match, they will want the ability to produce that stuff as cheap as possible or they will move on from the game in an instant. This centre piece can have the best of both worlds. Your idea combined with an onboarding new players to both formats of the game and future formats can be realised together.

@lgNanessa @SparklyUnicorn I updated this based on recent feedback. Saved the previous version as well.

Awesome. Are you about ready to write a proposal? Feel free to start with a draft and DM me once you’re or if you need help to get started. ^^

Edit: Btw, I sent you a DM a 2 days ago, we can use the same thread! (No rush though if you want more time to gather community feedback!)

That’s a great revision! Its getting bigger of an idea and may be a problem to deliver all at once. The delivery in phases approach is a great suggestion.

Wouldn’t it make more sense for the LG Design team to have a workshop about this proposal draft and come back with feedback with what is feasible and ties into the future plans they may have for the universe?

Then after that feedback is received a formal proposal be written up?

I love how well thought out this is! It would be completely mad to have this idea fleshed out and bought to life! Thanks for always dropping in and sharing your thoughts and ideas bro. This would be solid!

There’s no real timing on when to write a proposal. It’s really up to the author to write it when they’re ready! I’ve surfaced this and we’ll be responding with an impact report some time soon!

Just throwing the idea here, not sure if feasible though. Feel free to correct or improve.

Thank you for the ideas. I agree there are a lot of benefits to a mobile app.

Current idea is this would be a special Land NFT or just part of the web app.

For the over all game I believe mobile was not being considered due to app store policies. But this could almost be done as a mini game as well… Hmm…

I think your idea’s here tie in nicely with a lot of Aron’s ideas for CU from early AMA’s. I can definitely see a place for these ideas in CU. I read all of the comments you have received and many of my thoughts are repetitive from the thoughtful ideas already given. I think these lands would be perfect for Aron’s idea of air dropping to wallets that have a history of playing Nft games. One thought that could maybe be improved on is the aspect of locking in this land to have a home base and having it locked in so a new player can dive right in. If it was a NFT having a brief description in the NFT description explaining CU and how to lock it in would be helpful. Otherwise having your ideas be preinstalled and not needing to be locked in to start playing with. The aspect of locking and unlocking will be a very new concept for many players. If there is a way to by pass it. I think it would be helpful. But at the same time a NFT sitting in everyone’s wallets would be a great marketing campaign. Thanks for putting this together.

Hello, Brocc! Here with an informal impact report - we’ll write the official one if a proposal is written! Anyway, we love the idea! We can see the intent behind what you’re trying to achieve. It’s sort of in line with what we also wish to achieve! There are a few caveats, (specifically, the limitation on resources) so we’re trying to see how to apply your idea to the best that we can. What do you think of this? Let us know and we can keep on working together to see what works!

This being said, you’re free to proceed with writing the proposal in accordance to how you envision things to be! Our hope though is to work together to find a way to integrate without (hopefully) moving much of the existing milestones (unless the community is fine with it, btw!)

I was hoping some others would have stepped in with their thoughts.

Using the term ‘Scene’ as mentioned in the impact report I can see the advantages and simplicity of doing a entry Scene for the CU game. It doesn’t really seem like LG or the community needs a proposal for such a thing.

My instinct is a combination of the two is best, especially with current timeline and road map considerations. To me the ‘Farming Scene’ is lacking certain elements that the Town concept seems to address really well.

I really do understand the ease of the ‘V1 Loading Scene’. And as as stepping stone I’m not … disappointed … by such a thing. But if that is kind of it, I think it really undersells the look and feel of the game and 3d world.

I can understand some of the thoughts about some players not getting involved in the farm / craft / breeding aspects. I think part of the concept is to drive engagement in to those areas and having a button that takes you to empty clouds is unlikely to do so.

Recognizing it would take the art and design team a lot of time I think something that works well is as a concept a town can be built over time inside as well as outside of the game.

Hey, Brocc! Thanks for the feedback! How would you envision the combination of the two ideas would be like?

Also, just to clarify that if you decide that you would want this loading scene, we’d appreciate it if you could still write a proposal for it. We will do a more thorough study of where to integrate it in the timeline and implement if the proposal gets approved. ^^