Good day.
As we all know before, community events that was made prior to game launch gathered a mix set of audiences. Those who truly want to invest to the game and those who are just in for the rewards.
There are a lot of explanations as to why Laguna Games are willing to shell out a percent of these rewards that both target investors and discord event hunters.
These are acceptable before when we’re still waiting for the game to launch.

Now, let’s weigh the effect of these events being open to all.
Advantage:

Because of this, I proposed to make use of collab.land to make our discord safe from these types of users.
What is collab.land? 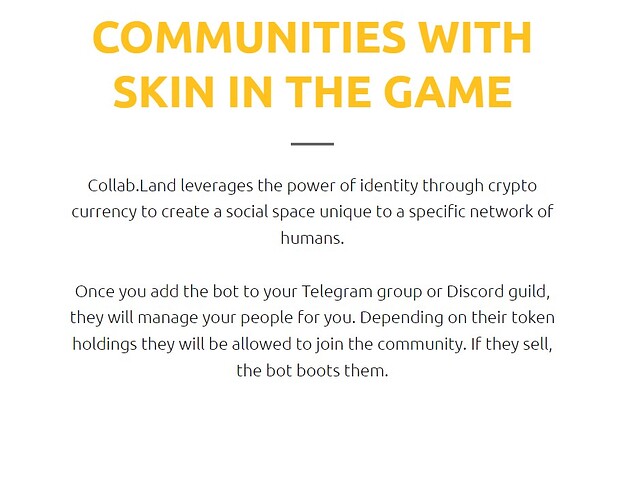 In short, we are being categorized by the amount or types of assets one wallet contains.
As we already implement KS, I don’t see any reason not to use collab.land to make our discord channel as healthy as possible.

Is collab.land safe?
Even mee6 bot is not safe from attacks so i’d be stupid if I say that collab.land is 100%.

By doing so we can keep everyone in line and make every important channel open to those who only needs it.
So what are some proposed example?

With the current trend in discord events and the current situation of the game. We are only putting another toll on our tokens as these should be kept only to the hands of those who needs it. You may argue that these token are not exclusive only to cu players, but the point is, they need to buy it in and decentralized exchange compared to those getting it for free and plans to dump it anyway as this is their only motive in the first place.

If this can’t be done, I’d say that instead of tokens that are meant to be burn in game, why not distribute loot boxes as a reward to the current and future events. With this. We can still push them to invest in the game as these rewards can only be open in the game.

TL;DR
As we already welcome KS, what’s stopping us from using collab.land? There is little to no disadvantage by implementing it other than making CU’s discord channel as healthy as possible.

I hope to hear from the community on this proposal. Thank you

Highly agree with this!

I’m definitely up for this.

ّI agree with this proposal. Thank you for taking the initiative.

totally for it, thank you for your work

Good idea, definitely in favor of this

i agree to this proposal. CU and LG please make this happen.

As people invested in the long term future of the game, this should be a no-brainer for us. Healthy token prices will portray a better picture to others looking to join as well as FOMO kicks in.

I understand where you’re coming from. You brought up some solid points, however, here’s a bit of the community management’s side though

You’re correct that it’s not safe. For collab.land to function like you envision it to be, it would need Administrator status on our Discord, and currently, no bot has that on our Discord. Bans and kicks are dealt with by humans. Mee6 does not have admin status and only does role -giving, or twitter hook announcements. It’s a big risk to be handing the gatekeeper’s keys to a bot. Collab.land would likely also need access to wallets hooked with discord in order to perform its function. At least with Kryptosign, the data is only accessible to LG, not to a bot. And only ever used to cross-reference for event rewards.

Just like any bot, we also foresee faults and outages on Collab.lands. Especially with selling/trading. It would not be feasible on the CM and mods side to keep track of the appeals.

As for the rewards of the community events, the allocation for Discord events is minuscule compared to in-game events. The amount has also been approved by our competent design team. As for the resources going into the hands of those who play the game, that’s what the in-game events like the Pioneer Program and the Summer of Love are for.

Ultimately, the twitter and discord events’ purpose is to welcome people who might have just started and to encourage them to buy in to the project. If the Discord caters to a select few who have the token, this would not bode well for our long-term growth.

The lootbox idea is good though, I’ll bring that up with Design.

Thanks for dropping by, fluffy!

As I mentioned before (and even on the past proposal I made for the collab.land integration) I have little to zero knowledge about how it works with discord channel like what you mention that the team will at least need to give it an administrator status. You made it clear that the weigh for safety is much more compared to the issues stated above.

Now that the reason is clear, is there a reason why it is always in UNIM form and not something like loot boxes to keystone (from minor to major prizes)? UNIM as a game reward is pretty reasonable but for discord events, You may notice that there are different reasons from the community why they don’t like UNIM as a prize for it.

Agree with the rewards but not the gated community at this early stage as we are embarking on a journey to onboard new players. I’d say quantity then quality. Prejudging new discord members is actually discriminating.

Imagine new players started with just being active in Discord without any assets but was able to build his/her estate and collect assets and succeed is a good story to tell.

I’m an example of this.

Definitely! It was UNIM for a long time pre-launch. Lootboxes are a fun idea to explore. I already brought it up and hopefully it’ll push through.