As we work to progressively decentralize authority within the Crypto Unicorns DAO it is important that we take the next step outlined in the Governance - Phase 1 post to elect a community led governance council. This council will take over from the Laguna Games team and be initially responsible for determining which Draft Proposals make it to an official Snapshot vote.

The Crypto Unicorns DAO is an experiment in progress decentralization. We are just a few months into a multi-year process of distributing ownership to active participants. The creation of the governance council will remove Laguna Games as the gatekeeper to proposals being sent to Snapshot for an official DAO vote. Leveraging a council of active community members will ensure that the community has a voice today while preparing for a future when the community takes over the majority of voting power.

The Governance Council will initially consist of 11 members. They will serve for a term of 6 months and are elected via the following process.

The top 20 candidates based on the number of nominations will be added to Snapshot for an official vote. Each wallet address will vote using a weighted voting strategy.

Each Council Term will last 6 months with new members being elected in the final month of the previous Council’s term. It’s important to note that a council member can not be elected more than 2 terms in a row!

Council Members have the following expectations:

All Council Members will receive a non-transferrable NFT Badge as well as access to a private discord channel.

Motion of No Confidence

Title: Motion to Review a Council Member’s Performance
Summary:
Name of the Council Member for review:
Rationale for the motion:
Detailed description of the incidents leading to the motion (including dates and evidence if necessary):
Conclusion:

The term of office of a Council Member elected during an emergency election will end along with the other Council Members’ despite starting at a later time. This Council Member’s term will not be counted as a full term.

This proposal will have no cost to the CU DAO and will be administered by our Governance Facilitator.

It’s our strong belief that progressive decentralization is a foundational tenant of the Web3 space and one we are proud to push forward. If approved, we’ll immediately begin the nomination process for our first council election!

Something new.
It will be interesting to see what it will turn out to be.

Very exciting. I look forward to seeing some of the amazing community members take a step forward to make this council. Thanks everyone for making Crypto Unicorns the best project on Polygon.

I will definitely nominate my candidacy. I love to participate in management and discussion. I like to help develop projects.

Thank you, everyone. Please feel free to send additional comments! I am looking forward to seeing our community members assume the role so we can work to build the generational IP we’ve always envisioned.

Proposal is good but flawed in so many ways. As this is a good initial step on decentralizing authority within the CU DAO, initial nomination will be based on popularity and that is not good to give authority to some DAO members.

What I suggest is the team will be the one to pick 20 members from the DAO based on it’s recent activity and involvement on discussions on every proposal and in CU discord made prior to this post so the criteria is somewhat legit and not because they have seen this proposal so they head on spamming comments on the proposal made under the forum site. Then that’s where the DAO will vote.

The other one is a guild can initially manipulate this voting system as they can ask their fellow members to vote for them for what ever reason they have to in the first place.

I also remember on one of the recent AMAs aron said that he’s the one who’s gonna handpicked 13 from the members and let the community vote on who should be part of the said new team.

Again, I’m pretty much in support of this proposal but I’m only against on how the the members will get picked initially

I agree to this proposal. but I believe its better that the team should pick for the nominees?

while the intention is on the right track, wrong people that were elected can be a problem within that 6 month term.

if LG cannot pick atleast 6, then maybe there is an option for us to impeach a certain individual for being a council or if a council is found to have a malice. they will be ousted with their badge removed.

Everyone can just bring themselves in to the chair which is good. but if we brought in the bad guys we should have a plan B.

Either way. there should be an impeach option or plan B option if in-case a council cannot represent itself properly or has been identified to be doing something malicious.

Looking forward on how this will go forward.

These people need to be carefully selected.

As part of the roadmap and seeing this proposal taking place, I fully support it. It builds even more confidence in the path the project is taking.

As listed above by other members, the only concern is this turning into a popularity nomination and vote. If the wrong members are elected with harmful directions for the project, that can be detrimental to us all. We need a countermeasure to such a situation and I think this can be done with LG picking some of the members who will act in good faith for the success of all and not a few.

I know this is a tricky situation where this council is formed to strengthen the path towards decentralization of CU but here we are asking LG to put a control lever of sorts within the DAO. However, I find this necessary to protect the project at such an early stage. I’m sure as the DAO grows more mature, more safety nets will go in place to flesh it out further.

Each Council Term will last 6 months with new members being elected in the final month of the previous Council’s term. It’s important to note that a council member can not be elected more than 2 terms in a row!

Also, this one has its loophole. This can be easily be planned accordingly to nominate those who got malicious intent on time. They will just wait for the legit council members to step down and wait to pass their proposal once their planned members got into the council members.

Tho at the end of the day, rejection of a proposal are still in the hands of the majority of the DAO members. But having something harmful getting pass into voting is something I wouldn’t like to think of

I agree with that idea, people’s elections, which I think are the most reasonable way to hope that the community will become more and more prosperous

The DAO idea is very good, but when the game is not stable, it feels a little early, and the candidates are very important. What criteria are used to evaluate?

I’ve created an Author’s perspective about how to pick a good candidate for a council.
maybe we can use this just a modifier for a candidate? . there is also a checklist inside where you can score a candidate.

If we want this to be extensive. we can probably do an excel version of the checklist and people can grab that copy and mark as they go.

let me know your thoughts. lets work towards finding a better candidate! Cheers! 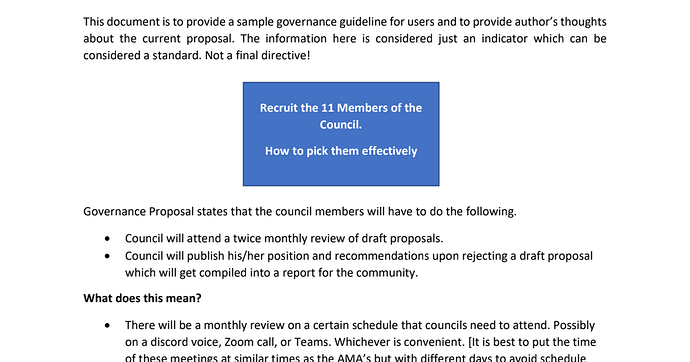 Love this policy and have just the right person in mind

Your efficiency is really high, run for election, I vote for you, hee hee

I think it’s a great start to the DAO.

I do agree with the concerns of Illest and KeizerMC and love the doc Keizer made with checkpoints for election.

I would love to participate but I know it can be hard for me to expres myself in english so I will not join.
There are great members in this community who have the best intentions for all of us. I think the team can easily pick a few, based on involvement of the last couple of months. For example ( Illest, KeizerMc, TimeTraveler just to name a few that come to mind).