I agree with @WINTER_AND_SUMMER ’s opinion, disagree with the original author’s idea.
A few call themselves high-viscosity players, but don’t read twitter or event channels and generic or other language channels?
Many channels have mentioned this airdrop, and many people are discussing it and there are multiple related announcements in various places.
I don’t think the project party and their announcement method can be blamed for not receiving the airdrop.
The airdrop is also given for free.
It is normal for the player to follow the rules of the project party if they do not receive it.
This is a free event initiated by the project party, and the recovery of expired airdrops does not infringe on anyone’s rights.

I support reopening, but if not, I’m okay too.

What I do not support is how the CU team and some members of the community has treated those who are requesting for the extension becaus they missed it.

One of the important things I check on a project is how they handle disputes and issues. CU was unfortunately too corporatey on this one. I was attacked by one community member for requesting an extension (just like everyone else), judged as a project hopper (I’m not), and was insulted. What did CU do? Nothing. They said we were in the wrong thread and will clean it up. Anyone who doesn’t comply and move to the forum will get a timeout.

I’m like… okay. I bought everything on this project, even when I don’t grind on Discord, because I do have a little child, a new project, and a bunch of other commitments for me to keep going back to discord or social media and read everything. I bought everything and minted it all. But hey, that doesn’t matter right? I’m only one person. Who cares? They already got the money.

It’s not about what you did but how you made other people feel. That’s what this issue is all about, really.

Although, this was one of those projects I was really looking forward to, I’m out.

I unequivocally support this proposal! I don’t see any problem with extending the period.
Everyone who received the NFT is a member of the community of the game. And I see no reason why they should be offended.

I also feel the same way about those who bought these NFTs by hand. Because it makes the same analogy as buying unicorns or lands. The secondary market is an integral part of the game.
When you buy a unicorn on the market you hope it gets more expensive, right? So what’s the difference between the person who bought an Airdrop NFT and the person who bought a unicorn?
All buying and selling is to increase engagement in the game.

Here’s a standard post attempting to manipulate public opinion. An attempt to play on emotion.
There is no specificity in this post.
I asked a series of questions that were not answered.
But through the emotional impact on other users are trying to influence the decision of the team…
When you make a suggestion or write a post, put the emphasis on specifics.
Participate in the future in this project or not, it is YOUR choice.

@WINTER_AND_SUMMER What you said really makes sense, I totally agree with your point, I checked the people who agree with this point, they don’t care about other things being discussed, they only care if expired airdrops can be recovered…

lol) what people did all this time?

Its fair to say they did. And an extension was already given. 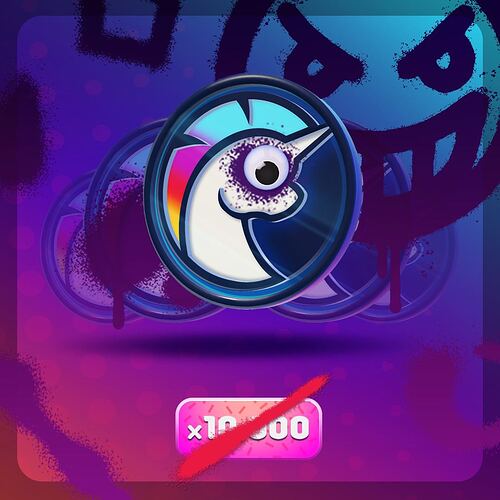 I think this idea is very good, but I also hope that everyone can pay more attention to the unicorn community. Maybe this plan can help the development of the unicorn kingdom in the future.

I totally agree I believe more than 60% of people have this problem.

Since most people are not primarily on Discord.

What CU has missed is that it doesn’t make such important announcements on major mainstream channels like Twitter, for example.

Hopefully the team will take this into consideration and resolve the issue quickly / with respect.

@Stol2mShadow If you look back at Twitter~ there are announcements，Of those, 90% were accepted to 60% who had a problem?

i don’t think so that more than 60% of people in trouble.
90 % RBW has be acclaimed!!! Why most people can complete in time ?

I think we can take a snapshot of peoples view on this now.

Reopen the RBW airdrop claim for those who missed the last two deadlines?

lol
I can’t agree
60%? ?
Come on bro, the vast majority of people have received it, okay?
Don’t pass your problems on to someone else just because you didn’t claim the airdrop

If there are participants who have not had time to get their airdrop, then why are you all against it? They are not cheaters, they are members of the community, just like you.
Understand, the project has already scheduled all of these giveaways and that means that if everyone gets the tokens due to them, we won’t get any meaningful pressure on the course. But at the same time, there will still be members of the community in the game who will now be doubly attentive to all announcements.
If we will not be kinder to each other and help each other develop, it will negatively affect the attitude towards the project as a whole