Can we get a breeding/evolution calculator, similar to the telegram bot in-game for a small RBW cost, say 1-5 rbw that accrues to the treasury for every calculation conducted?

It is incredibly difficult to figure out which unicorns to breed, when to apply boosters, etc. It is really dragging down the UX. I realize this would probably take a few weeks to build out, but would provide some nice RBW sinks into the treasury and drastically enhance the breeding/evo experience for the user.

This is a great ecosystem fund project. If the community can help find a dev to put forward a proposal, that would get us started.

This was a core feature in white paper. Team stated in white paper that we would be able to see genes in stable in game to compare unicorns to see which were best to breed. I hope that team still plans to add this feature to game. I would find this much more helpful in game then on a app I do not use. I do 100% like the idea. And 100% agree it is needed. Will hope team takes this idea and decides to follow through with the feature they would build for game.

Hey, @timetraveler ! Before this causes misunderstanding, I would like to make a correction. I don’t know where the misunderstanding came from. This feature is not in the whitepaper. For reference, here’s the link to it: Overview - Crypto Unicorns Whitepaper V2

You are correct I not seeing it in white paper. Trying to find where it was published. It was a promised feature at one point. Will try to find publication. It was the reason community was not for spending money on unicupid breeding add on. As we were told stable in game would display Unicorn genes. Unfortunately it has never happened and never got added to the notion guide like the sire feature or adding materials to RMP. Will scan the old white papers again. I know its written somewhere. And yes I know after things get revised it kind of means the old ones are toast. But for me its important when we get told things are happening soon and then nothing happens that someone speaks up and says hey what happened. I will remove my post if I cant find where its written. But I am sure 50 OG community members can back me up on this feature.

When game launched we were supposed to be able to see unicorn genes in the stable. We were told right before launch it would happen soon after launch. When game launched stable opened to blank screen. Now the blank screen redirects players to RMP. This is something that anyone waiting for launch knew about and how we planned to view genes in game and where we would use sire feature to breed with other players. Hope this helps clear up where I was coming from. Thanks for brining up so I could clarify.

Credit to community member Dipbeak for sharing what others wont.
The genes are available on chain to do what team said they would as Hawku can clearly pull gene information from. As they are made cryptic for a common or advanced player to find in code it is a rbw sink of mystery for most players to find but could easily be added to Unicorns information in game. It is as simple as using information in the picture and cross referencing genes on hawku. Examples and pictures below. This information has been provided for free. Team can now implement in game as it is no longer a mystery and we go now breed with information instead of being blind. 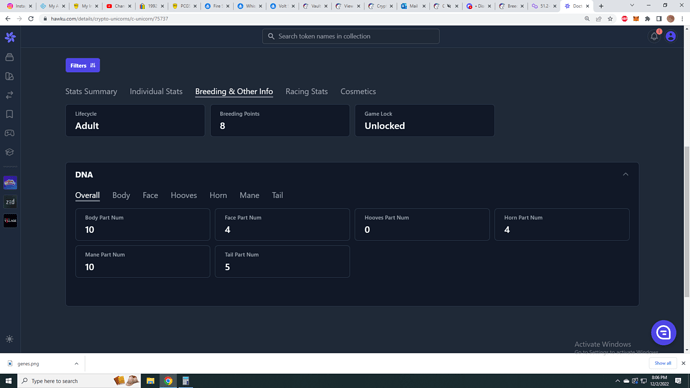 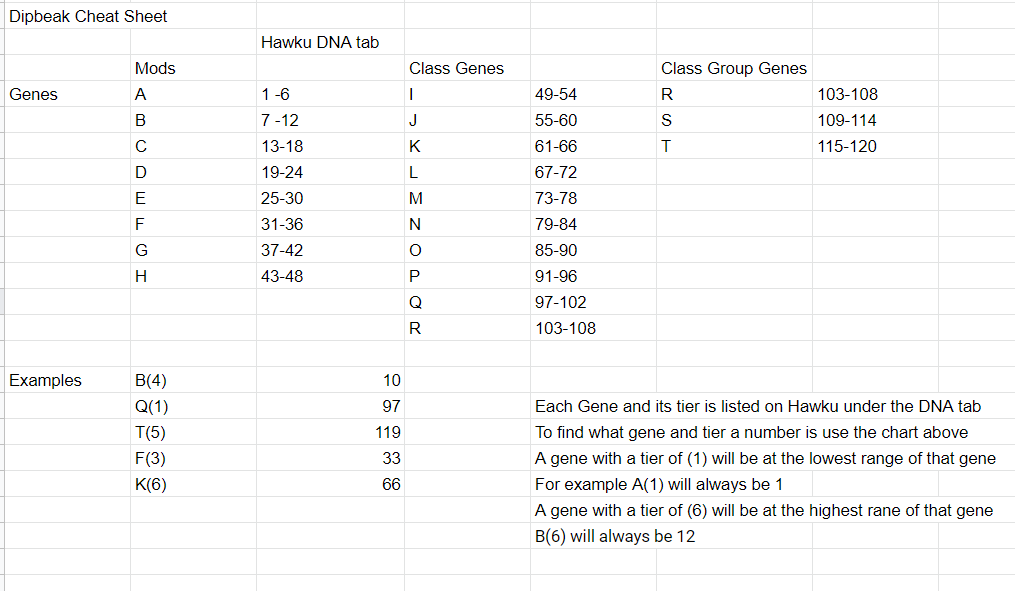 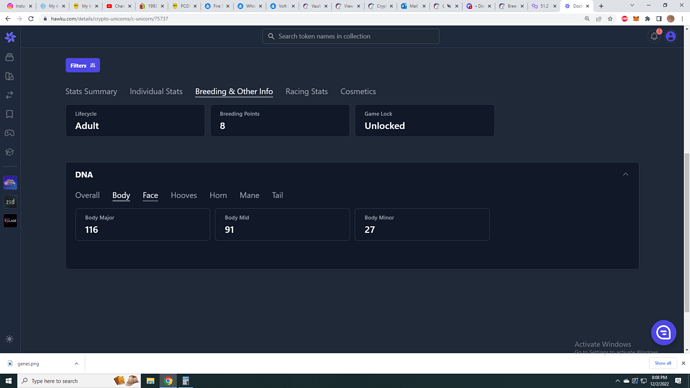 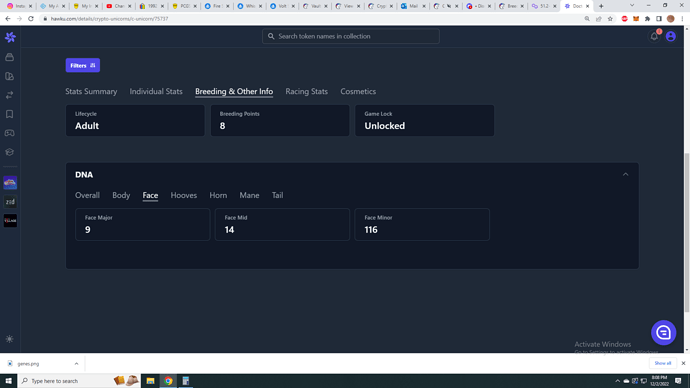 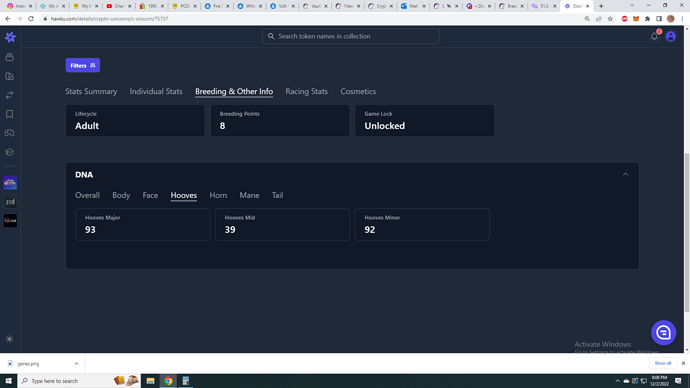 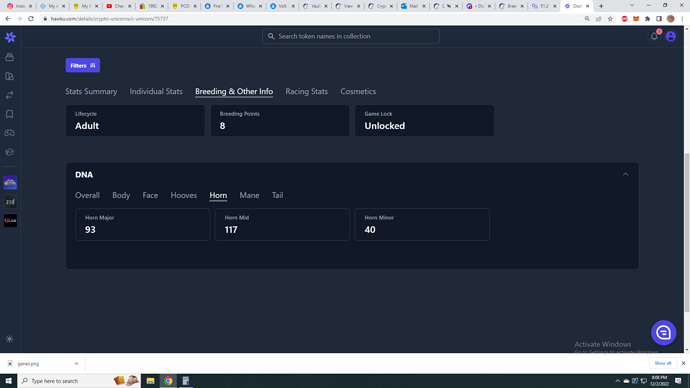 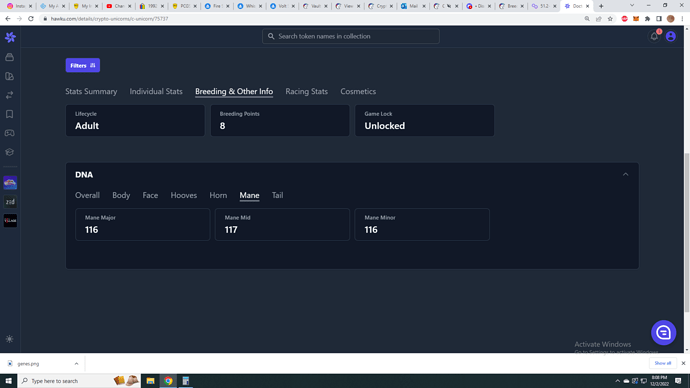 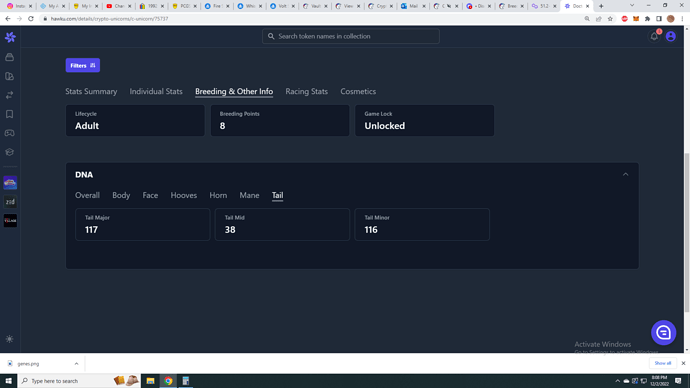 I was not able to find the original publication by team. But found a few conversations about it. 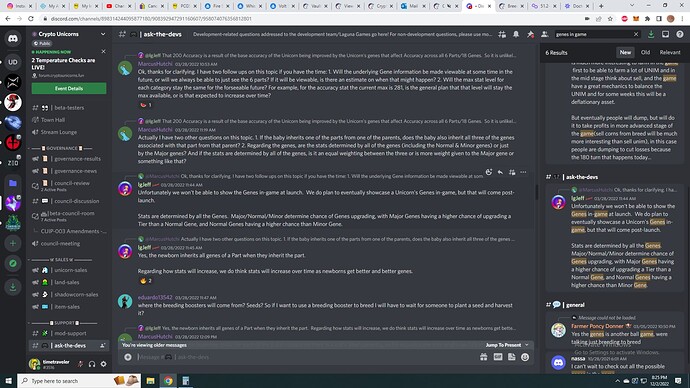 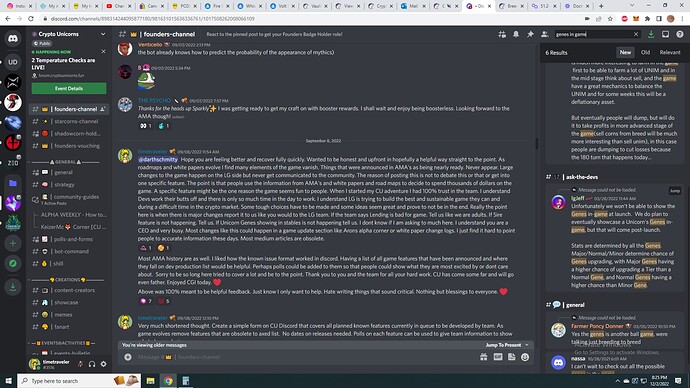 STRONG agree with tt here. It is impossible for someone like myself who only has an hour max each day to play CU to dive into the best way to breed.

Please please please implement tools or info that helps in game. Happy to spend RBW/UNIM for the convenience. Unless I want to sacrifice my weekends (which is the only thing that keeps me sane working in crypto full time), I dont stand a chance in breeding competitive corns for jousting!

@timetraveler From what I can see, it was not a promised feature as it never made it to the roadmap. We indeed mentioned that it can be made available post-launch and take accountability for it, though. This is something we still intend to add to the UI, don’t worry. Post-launch though is a very very long period of time which means any time after the game is released. As everyone knows, we’ve started implementing a living roadmap fairly recently which should tell us what things are immediately being prioritized.

@swmartin19 Hello. Please DM me instead of tagging me once you’re ready to write your proposal. ^^

Not interested in writing a proposal at the moment, just wanted to chat with the community on the idea! Pretty awful UX for breeding and tt, one of the longest standing community members, seems to agree. I think thats worth noting.

I understand. Thank you! Although, it’s best to write a proposal for development requests being made to LG that are currently not in the living roadmap. Once you do, LG will respond with an impact report and then the sRBW holders can ultimately decide how to prioritize!

Edit: To be clear, I’ve taken note of the feedback. ^^ As I mentioned above, we still intend to make the genes viewable in the UI some time in the future. We don’t have an exact date but if somehow we want to make this a priority, we might want to run it through a vote first.

I’m against this proposal. There are enough tools outside of the game that does this provided by community members. I’m all for helping players but this seems more on the hand holding end of gameplay. If the game showed the gene numbers just like Hawku does, that’s okay. But when the game starts pointing out exactly which unicorn is better than which to breed, that takes all the skill out of the breeding loop. It becomes a more braindead gameplay loop where no skill is applied to get the best results.

Very fair take! Thanks for sharing your thoughts. I agree that just providing more information on a given unicorns genes would be the best move.

I dont want to be told which unicorn is best to breed. i agree here. Just be able to see what it is. Just knowing the genes lets you build a strategy around breeding. I have spoken with many people and most people even knowing genes still approach everything differently.

This topic was automatically closed 5 days after the last reply. New replies are no longer allowed.